Health monitoring systems are essential for detecting changes in disease status in a timely and effective manner.1 Of especial importance are those related to respiratory diseases of swine since we are dealing with very large populations and fast disease transmission processes. As a result, improving early detection of disease onset can have a tremendous impact on animal productivity as well as welfare.2 SoundTalks™ is a cloud-based sensor technology that monitors 24/7 the sound emitted from pigs. Based on artificial intelligence, this technology processes the sound data collected at the farm and transforms it into a metric (ranging between 0 and 100) that represents the animals’ respiratory health status (ReHS) as green (healthy, ReHSh), yellow (increased warning) and red status (immediate action)indicating respiratory problem (ReHSp). Despite the applicability of this technology, further research is needed to understand its functionality in a commercial farm regarding the early intervention in the face of an outbreak and specifically related to the total quantity of treatments. Therefore, the objectives of this study were to describe respiratory disease impact in a nursery facility monitored by SoundTalks™ and to evaluate the overall treatment consumption compared to the period prior to SoundTalks™.

The study was performed in a nursery facility as part of a 1300 sow farm in Northern Denmark (8 weaning rooms/site, 900 head spaces/room filled weekly with piglets of 4 weeks of age). All rooms were monitored for respiratory problems via sound by SoundTalks™. For the purpose of the study, production variables such us batch number, mortality, as well as number and type of treatments (antibiotic vs antipiretic) were daily recorded and requested for the previous 12 months. Other health variables (i.e. SoundTalks daily average ReHS value) were recorded by Sound Talks and consolidated for the analysis. A Chi-square (non-parametric) test was used to study whether or not there was a statistically significant difference between the observed and the expected number of treatments before and after the monitoring period with SoundTalks™.

During the 6 months of the study period, between 2 and 3 batches per room were monitored by SoundTalks™. Concurrent to the beginning of the sound monitoring the farm experienced an outbreak of PRRS. Results showed that, in all rooms, 9.9% (max=4.5%; min=19.4%) and 5.5% (max=6.7%; min=2.7%) of days the farm had respiratory alarms, as indicated by yellow or red warning signals, respectively. There was an evident room effect as the percentage of days with green, yellow or red ReHS significantly differed between rooms. Production performance of a total of 69, and 20 batches before and after SoundTalks monitoring where analyzed for the study. Fig 1 represent the total and percentage of individual treatments (antibiotic vs antipyretic) applied during the study period when Influenza (IAV) or other respiratory pathogens were diagnosed before and after SoundTalks monitoring. 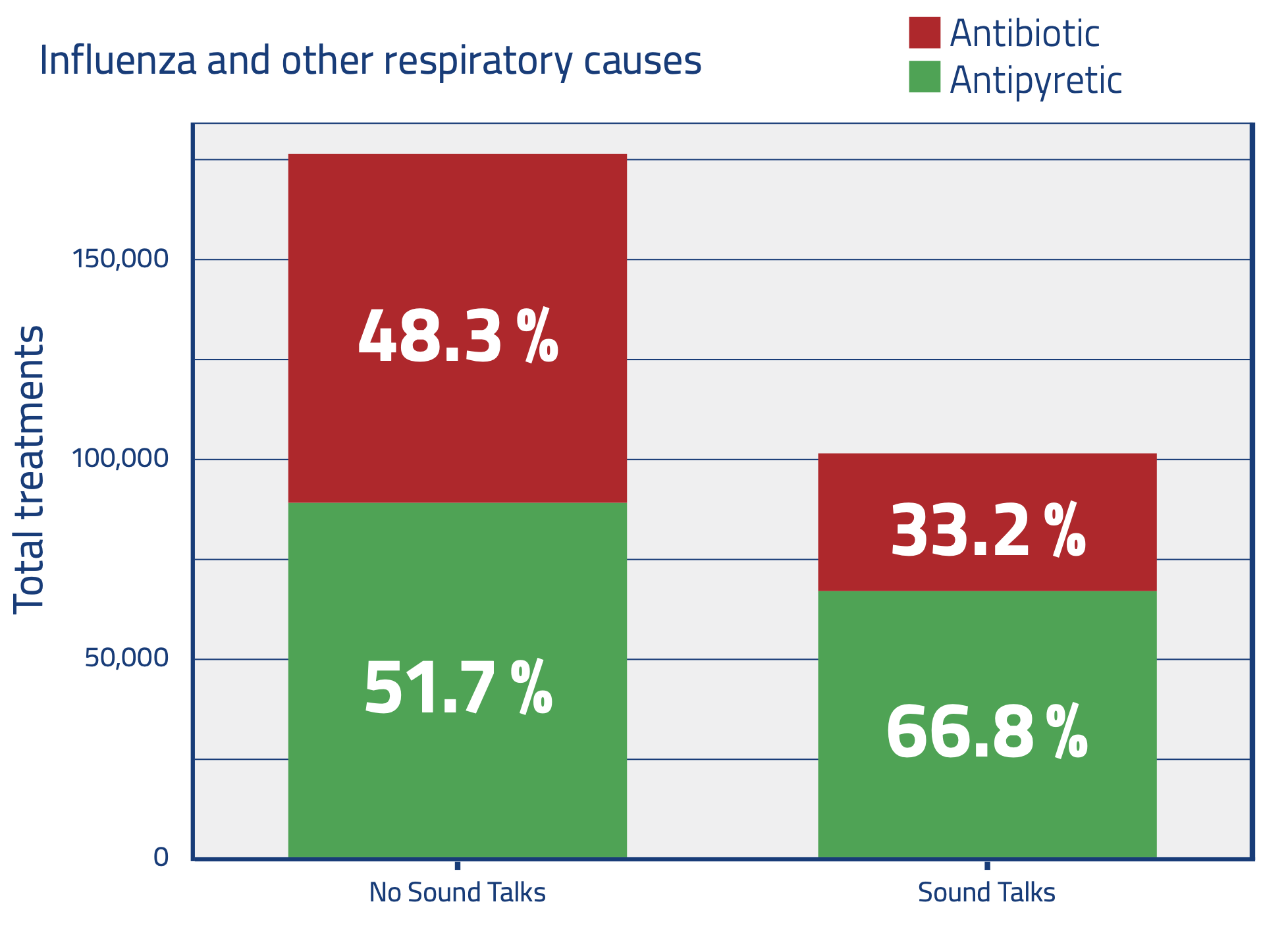 Fig 1. Number of total individual treatments (antibiotic vs antipyretic), as well as percentages, applied during the study period when Influenza (IAV) or other respiratory pathogens were diagnosed before (69 batches) and after (20 batches) the monitoring by SoundTalks.

Results from the study shows that in these nursery rooms, the producer did not change the overall treatment consumption during IAV outbreaks after the implementation of SoundTalks monitoring, however there was a 38% antibiotic reduction and a 395% antipyretic increase when other respiratory pathogens were identified (p-value < 2.2e-16 Pearson’s Chi-squared)

Results from this study demonstrated the importance of continuous monitoring of nursery population to ensure the early detection/intervene in the face of outbreak. Under the conditions of this study, the implementation of SoundTalks lead to a 38% reduction in the use of antibiotics with the exception of cases involving IAV as the primary pathogen. Despite the importance of these results, additional studies are needed to confirm these results under different health status and conditions.