Pen-based oral fluid sampling has proven to be an efficient method for surveillance of infectious diseases in swine populations. Real time sound analysis to detect cough in pigs has been showing promising results when used experimentally and based on these laboratory trials, it could be demonstrated that cough in pigs could be identified correctly in 94% (1). The purpose of the current trial was to use pen-based oral fluid samplings in combination with monitoring cough in fattening pigs by means of the Pig Cough Monitor.

The trial was carried out in one batch of fattening pigs in a commercial herd in North-West Germany in spring/summer 2013. One batch consisted of approximately 100 pigs, which was placed in one room with 4 pens with 25 pigs each. Each pen was equipped with one microphone transmitting continuous sound signals for 4 months to the Pig Cough Monitor, resulting in 4 microphones per room. The herd had a history of circulating PRRSV , SIV and Mycoplasma hyopneumoniae. Pen-based oral fluid samplings were obtained each week as well as monthly serum samples of 2 animals per pen for a duration of 3 months and analyzed for presence of antibodies against PRRSV, SIV as well Mycoplasma hyopneumoniae in order to possibly link the presence of “cough” to infection with either pathogen. Samples were analyzed by means of the ID Screen Influenza A Antibody Competition ELISA (ID.vet, France), IDEXX M.hyo Ab Test and IDEXX PRRS OF Ab Test (IDEXX, Germany).

The continuous recordings of the Pig Cough Monitor are summarized in a graph by indicating the mean counts of coughs/hour/microphone together with the number of postive samples for SIV, PRRSV and Mycoplasma hyopneumoniae antibodies in serum and oral fluids (see graph 1). As shown in previous studies (2) a mean coughing rate of 10 coughs/hour seems to be a baseline that is occurring in this farm irrespective of pathogen exposure as measured by the algorithm. The weekly pen- based oral fluids enabled a timely monitoring of respiratory pathogen exposure. As evident from graph 1 there was a small paroxysmal cough for 8 days (between July 3 and 11, 2013) that coincided with a seroconversion to SIV in both oral fluids and serum. Although the animals remained seropositive to SIV in oral fluids and serum until the end of the fattening period, the cough declined rapidly. 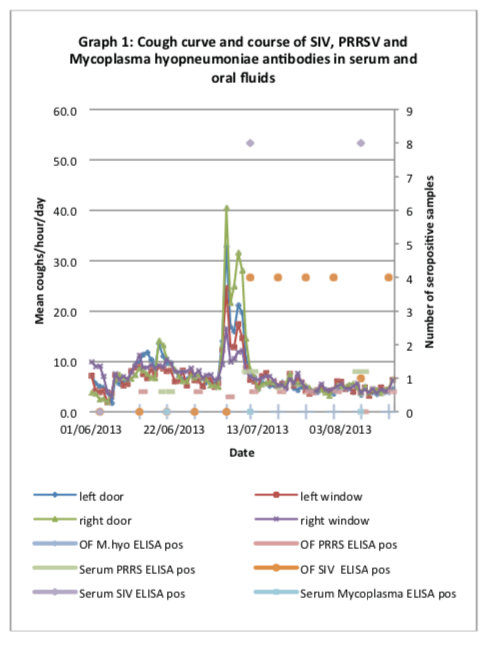 The continuous monitoring of cough by means of the Pig Cough Monitor in a German fattening herd enabled an objective measurement of “respiratory health” or cough respectively. Infection of fattening pigs with SIV resulted in a paroxysmal increase of coughing for 8 days, which confirms the pattern of clinical disease described in literature. The pen-based oral sampling and subsequent lab analyses allowed a timely and animal friendly surveillance of herd health.

Further studies are needed to analyze the possibility to discriminate the different types of cough.