The trial involved two subsequent batches of fattening pigs in a commercial herd in North-West Germany from autumn 2012 until mid 2013. One batch of pigs consisted of approximately 100 pigs, which was placed in one room with 4 pens with 25 pigs each. Each pen was equipped with one microphone transmitting continuous sound signals for 4 months to the Pig Cough Monitor, resulting in 4 microphones per room. The herd had a history of circulating PRRSV, SIV and Mycoplasma hyopneumoniae. Serum of twelve randomly selected pigs (3 per pen) was obtained once per month and analyzed for presence of antibodies against PRRSV, SIV as well Mycoplasma hyopneumoniae in order to possibly link the presence of “cough” to infection with either pathogen.

In both batches of pigs a daily cough pattern between 10 and 20 coughs/hour could be observed irrespective of any exposure to respiratory pathogens (see graph 1 and graph 2). Both batches were exposed to SIV in the middle of the fattening period and PRRSV at the end of the fattening period. The first batch of pigs was exposed to infection with M. hyopneumoniaeapproximately 8 weeks after placement into the fattening (17 weeks of age), which was followed by a distinct increase in coughing reaching 50 coughs/hour/day. The second batch of pigs was not exposed to M. hyopneumoniaeand had no distinct increase in the pattern of cough. Infection with SIV and PRRSV alone did not result in an increase of cough in the second batch, whereas a subsequent PRRSV infection of infection with M. hyopneumoniaeseems to result in a further increase in coughing in the first batch. 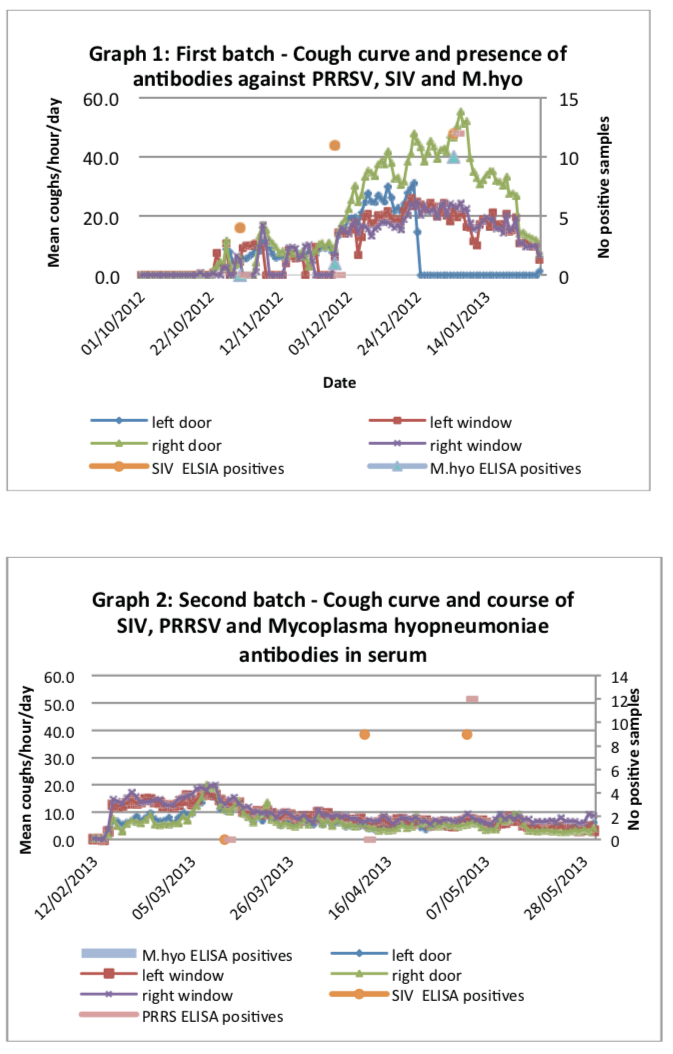 The continuous monitoring of cough by means of the Pig Cough Monitor in a German fattening herd enabled an objective measurement of “respiratory health”. Infection of fattening pigs with M. hyopneumoniaeresulted in a distinct increase of coughing. The underlying data suggest that an additional infection with PRRSV aggravated the cough induced by Mycoplasma hyopneumoniae. Further research is needed to investigate the co-infection with regard to the frequency and intensity of cough by using the Pig Cough Monitor.